Last week, I began my Monday Musings with this sentence, “We didn’t have a blizzard this year, but we had some really cold days that led to school cancellation.” 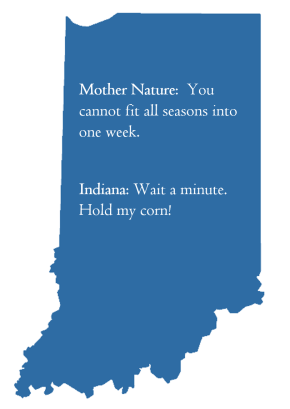 All I had to do was wait on Indiana to deliver.  If you live in Indiana and are on social media, you probably have seen some variation of this Mother Nature meme.

Last Friday, I had a couple meetings.  In the morning, I had on my winter coat and by the afternoon, I ditched my coat and was wearing a just a sweater jacket.  I didn’t even have it zipped closed.  Then, I heard this foolishness on the radio about a winter storm warning beginning on Saturday morning and lasting until 11 p.m.  The weather people told us not to worry.  They said we would get 3-5 inches and it would melt away quickly…they underestimated good ole Indiana, who didn’t care that we were in spring and many students were beginning spring break.

A snow storm was not in my plans.  My boys only have one week of spring break.  My second week of spring break is the same week as their one week break.  I wanted to get out in the yard with my boys and do some work in the beds in our garden during the first weekend of their break.  Instead, we were inside binge watching Wakfu on Netflix; it’s a show from France about a boy with powers who is on a quest to find his family.  Every once in a while, I would look out the window and see that the snow was still falling and as the hours passed, my boys were getting really antsy.  I said, “Let’s go outside.”  I did not really want to go outside in the snow during spring break.  My plan was just to monitor my boys outside while they burned off some energy, but then one of them threw a snowball at me while I was video taping…then it was on and popping.

We had so much fun in the snow.  I can’t remember the last time I ran in the snow, threw snowballs, and made snow angels.  This was a good lesson for me.  Plans aren’t everything.  Some of our best days are the ones when the unexpected happens.  We need to embrace the unexpected.

I’m not going to lie.  I’m sore all over, so I probably need to get active a little more than during a snow storm.  It didn’t help when these individuals that I feed and take care of tackled me to the ground.  One grabbed me around the legs and the other jumped on my back.

This quality time with my boys is time that can’t be replaced.  My advice to you today is to embrace the unexpected, be flexible, and don’t get so tied down to your plans.  Playing in the snow with my boys is exactly the plan I needed to follow on Saturday even though it wasn’t on my perfectly planned out calendar.