If you read my Monday Musings last week, you know I was in a car accident and my car was totaled.  I was grateful to be alive, but could only see ruined plans such as having absolutely no debt except my mortgage in 2018.  The week that followed up until today was a comedy of errors.  I kept forgetting to do stuff or couldn’t get things accomplished.  There are only thirteen gifts under our tree; eight are for our boys and the rest are for other family members.  Unfortunately, our children discovered one gift prior to Christmas.  The gift arrived the evening before, but the company sent it in its box instead of placing it inside of a shipping box, so our boys saw it when they went out to the bus stop before winter break began.  We don’t do Santa Claus, so they are very much aware of who buys the gifts; we had let on that they probably weren’t getting this gift.  That was ruined surprise number one.  Then this happened with my husband’s gift.

I know some of you are wondering,  “What type of parents only has eight gifts under the tree for their two children?”  It’s the type that teaches gratitude and gift-giving year round.  This year is the first year since my husband and I married 11 years ago that we have attempted to exchange gifts on Christmas.  (He has a gift for me this year, but I won’t receive it on Christmas.)  We decided after getting stressed out about trying to find the right gift for the holidays and our birthdays, we would show love throughout the year and that could be through shared experiences like traveling or random gift giving.  My children have already received Christmas gifts throughout this month.  We didn’t see the point of waiting.  We don’t make opening gifts the focus on December 25. Honestly, they don’t care about what we buy or don’t buy because they have four grandparents who are going to spoil them rotten today…and that’s okay.  That’s what grandparent are for, right? 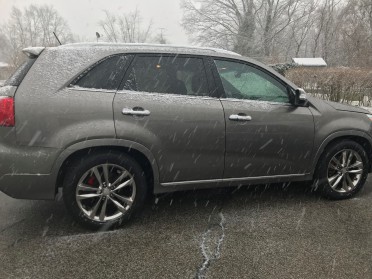 Yes, after pouting about not having a car payment for six years, I finally purchased another used vehicle, a 2014 Kia Sorento.  As The Jeffersons theme song goes, “I’m moving on up” from my 2005 Buick Century.  If all goes according to my new plan, I hope to have it paid off in two years, but my aggressive goal is one.

Even though nothing has gone the way I wanted during the past week, I have been pretty happy since I recovered from my pouting spell.  I’ve had lots of fun with my children so far during break and I’m enjoying today even though I don’t have tons of gifts to give away.

Last night on Christmas Eve, I watched a short video about gratitude from Forest Hill Church, that reminded me I already have all I need.  I say to you regardless of what your plans are today, find at least one thing to celebrate with joy and gratitude.